There Were Planes
The "No Plane" Argument is a divisive diversion tactic
to bait skeptics and cause confusion until the public stops caring.
There is more than 1 reason to fake plane photos
We do not have to jump to the "no planes" conclusion.

A tactic to prevent and postpone prosecution for criminal conspiracies
by dividing the efforts of the investigators, and causing in-fighting.

Release fake photos, to divide and conquer those investigating the crime.
Cause infighting between those trying to uncover the truth.

1. Take a key aspect of the crime that many people witnessed.
2. Make fake photos of that key aspect (the diversion)
3. "Leak" them into the community of investigators ("Wild Good Droppings")
4. Some will take the bait and be a divisive force.
5. This discredits the whole group of investigators

"If they can get you asking the wrong questions, they don't have to worry about answers." - Thomas Pynchon, Jr.

"No planers are no brainers who cling to faked photos like flies to fly paper." - Brian Wolberg

Even through there were planes, witnessed by hundreds of people,
from multiple angles, which match when combined and analyzed,
the perpetrators created and release faked photos of plane anyway.
Photos of the aluminum plane bouncing off the steel towers were
evidently collected and destroyed.  We never get to see those photos.
Faked photos cause some investigators to claim there were "no planes"
making them, and all investigators, look foolish in the eyes of the public.

These fake photos were released to confuse the public.
Where are the real photos of the planes?

Faked CGI photos were "leaked" to provide a wild good for no-planer/no-brainers to chase
in a "divide and conquer" strategy by the real 9/11 perpetrators to keep their mind off RCTO.

Real photos of the plane crashing outside the WTC wall and falling to the ground would have been destroyed.

There were many videos of planes with the same path.

Wild Goose Droppings = pieces of crap and disinformation that are dropped here and there to lead people on a Wild Goose Chase.

Example1:  Someone "leaked" that Flight 93 was seen in Cleveland.  But this has not checked out officially.  Yet it is enough to get people to think that the hijacked planes still kept flying after the WTC attacks.  It is very easy to do.  No one even has to be an official.  Just pick a city, then start posting on the web that someone said that someone saw a 9/11 plane on the runway at some airport.  Then hope the rumor gets legs.  But if people check with Cleveland Flight Control, the story does not check out.  Sure they may be "in on it".  But everyone can't be.

Example2: Richard Hall cites "official" Army radar data showing a 2nd plane (that no one saw) which he presumes was invisible and projected a hologram.  Why is he believing the Army if the military industrial complex was "in on" 9/11?

It is much easier to simply take over the original planes by remote control than fly them into the buildings.

Unfortunately, Divisive Discrediting Diversion has worked too well with the 9/11 Truth Movement.   Even critical thinking scholars such as Dr. James Fetzer have taken the bait.  He correctly finds that there was photographic and video fakery regarding the planes on 9/11.  But many jump to the erroneous unwarranted conclusion that there were not planes at all.  This caused a big division in the 9/11 Truth Movement, to the point where Dr. Fetzer and Dr. Stephen Jones split up the Scholars For 911 Truth into two different groups.  No Planers are not invited to speak at Richard Gage's AE911Truth conference.

The "Nose Out" Model Hypothesis

The "nose out" could have been a large model propelled outwards by the pre-planted explosives.
It was for added effect, similar to the 5 light poles tipped over at the Pentagon.
Ace Elevator Company had 7 years (1994 - 2001/9/11) to plant explosives and models.
The hole was not big enough for a whole cylindrical model,
so a flat sheet of steel may have been used, which looks like a plane from the side.

The presence of fake photos of planes does not mean there were no planes.
There is still the option of having planes.
CGI and planes are not logically mutually exclusive possibilities
Here are the 4 options, only 1 of which is impossible.
(There can't be real photos of fake planes or no planes.)

Note:
"Planes Actual" here means the actual Boeing Flight 11 or Flight 175, including Remote Control Take Over.
"Planes Other" means the planes were something other than Flight 11 or Flight 175, including CGI, drones, hologram, or nothing at all.
"Photos Actual" means un-retouched photos
"Photos Other" means some kind of photo manipulation was done

Sadly, Dr. Morgan Reynolds also fell for the Divisive Diversion
and Fox News made himself look foolish to the public,
although he was absolutely correct that the photos were fake.
www.youtube.com/watch?v=c4d2Mt2a6iM 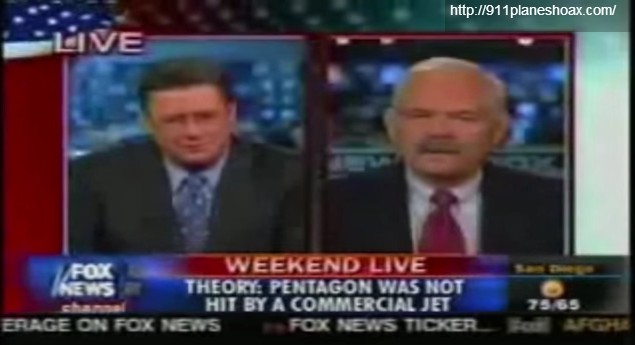 He should have said "we see obviously faked photos,
designed to make us say there were no planes.  Why?"

The proper, logical conclusion to the presence of fake plane photos
is that there is manipulation and a cover up going on about 9/11.
But it is an unwarranted conclusion that there were no planes.

The could be fake photos AND real planes

The existence of faked CGI photos
and the existence of planes hitting the WTC towers
are independent premises.
There is no logical, causal connection between the two.

Don't fall for the tactic of Divisive Diversion

Unfortunately, two giants in the 9/11 Truth Movement, Richard Gage and Dr. James Fetzer are not currently collaborating.
How much closer we would be to a real 9/11 investigation if they could join forces.

The Plane Does Not Fit

Fake Photos Do Not Necessarily Mean No Planes

Even with a fake looking photo, we cannot conclude "there is no Dr. Fetzer".
The unwarranted assumption is that the best possible photos are released.

Some assert "there were no plane parts"

Trained investigators know what an airplane part looks like.

How could this be faked in broad daylight with hundreds of people around?

Plane parts in the 9/11 Memorial Museum

Morgan Reynolds and Tom Mattingly are supportive of no planes

The No Planes Theory MIGHT be correct. But until we get a New Investigation of 9/11 we won't know for sure. NPT will never be accepted by most of the public. So we should go with a theory that no one can argue with to bet a New Investigation. For example, RCTO is indisputably possible and explains all the evidence without having to ignore witnesses, planes, radar, crash debris, etc.

Which theory will the public accept so we can quickly get a new investigation of 9/11 and find out which is correct? Please try to "shoot down" RCTO and convince me of NPT, Holograms & DEWs.

Note that there are many plane parts bouncing off WTC 2 in the southern direction.
So the entire plane did not enter WTC 2.

Confirming the distance from the approaching plane to WTC 2

Witnesses to the plane crashing into the Pentagon
by David Chandler and Ken Jenkins
https://www.youtube.com/watch?v=E9-O6iqJnOA